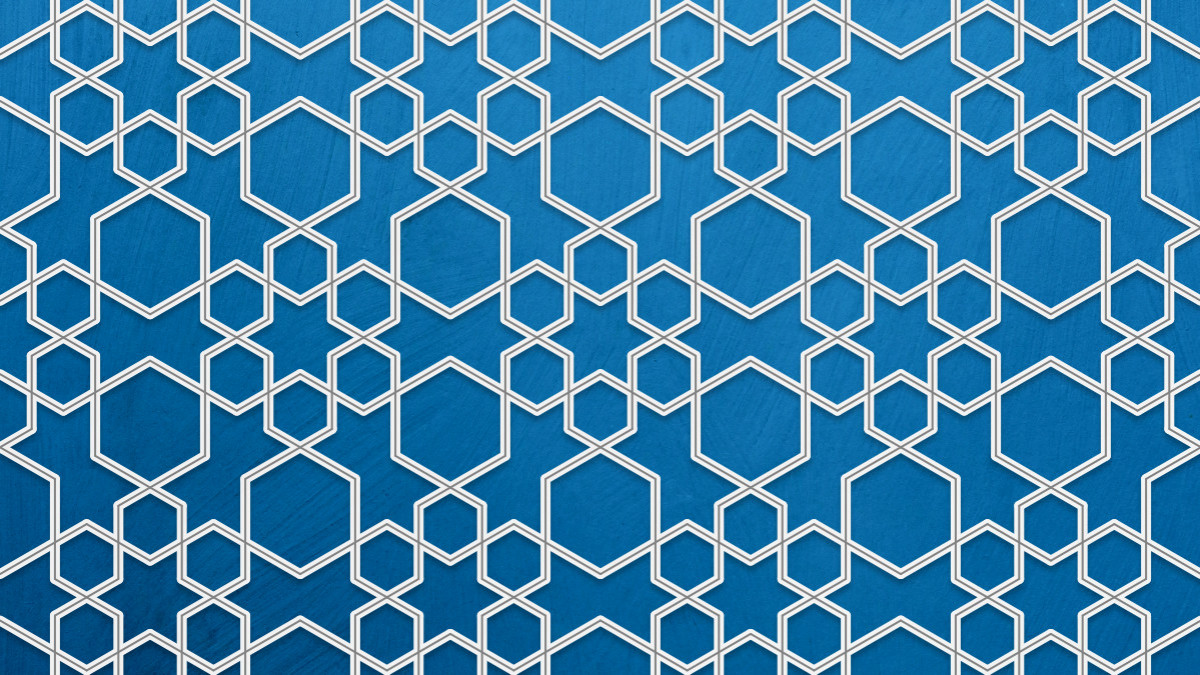 A study into the geometry behind an Islamic pattern located at Sultan Qala'un, Madrasa, Cairo, Egypt.

It's no secret, my interest is in developing patterns that are based on dynamic symmetry. Islamic geometric patterns lend themselves to correlating perfectly with continuous proportions like the square roots of two, three, four, and the golden ratio. These proportions give rise to an asymmetric division of line and space, which I personally prefer.

The pattern above is based on a pierced screen that can be seen at Sultan Qala’un, Madras, Cairo, Egypt. I have not been there myself, but hope to visit one day.

Like any Islamic geometric pattern, a sound method of construction is required. I have found this method to be the Traditional Method as taught by Mohamad Aljanabi. It also known as the Inherited Method because it has been handed down through the generations. It is the only method I have come across that when applied, is consistent with Dynamic Symmetry.

Yes, there are other methods, but I have found them to be hit and miss.

Drawing this pattern was an exercise in applying the Traditional Method without reference to any tutorials. If you are interested, a tutorial does exist, and it can be found in Mohamad's Facebook group.

The construction lines above, that is, the thin white lines in the background, are all carefully drawn within a root-three rectangle. Everything can be drawn with just a compass, straight edge, and pen or pencil on paper.

One of the rules of the Traditional Method is to establish points, particularly the points on the perimeter of the rectangle (unit of repetition), then to join these points. It's a methodical approach to designing a pattern that ensures a harmonious relationship between the spaces within the pattern and the pattern as a whole.

It’s hard to imagine that swinging a compass and drawing straight lines without any measurements can result in the ordered complexity of well placed arcs and lines.

While the construction lines are important, what is more important is that they are being used to subdivide space in a methodical manner. It’s this subdivision of space that generates shapes such as regular polygons, stars, and petals, with little effort. But that's not all, the Traditional Method ensures the pattern conforms to dynamic symmetry. With dynamic symmetry, there is a well defined proportional relationship between the shapes of the pattern, the unit of repetition, and the pattern as a whole.

A Different Method of Construction and Similar Pattern

There is a different approach to creating this pattern. To the untrained eye, the pattern looks the same, but it's different to the above pattern. This is a pattern that is also constructed within a root-three rectangle, but it is not consistent with the Traditional Method; nor the root-three proportion. This variation of the pattern was constructed by Aslam Qureshi and I think it has some interesting properties.

The reason for including it here is the fact that there is still a clear relationship between the shapes. It's not a proportional relationship based on the square root of three; it's an arithmetic relationship where each shape is related by a unit of length, 'y'.

This method of construction starts with subdividing the root-three rectangle into nine smaller rectangles, then aligning the pattern top-right and bottom-left with the vertical lines of these rectangles.

I do know from having drawn many Islamic geometric patterns using the Traditional Method, that the root-three proportions will be maintained across all three-fold patterns created using this method. I do not know whether Aslam's construction can be universally applied to the same range of patterns. I don't know because I haven't explored this avenue of enquiry.

On Facebook, the two approaches to creating this pattern resulted in some heated discussion. I find both approaches interesting because each clearly expresses a relationship between the shapes in the finished pattern; one being a proportional relationship and the other, an arithmetic relationship.

I will always have a preference for the Traditional Method, and this is because I love the compositional benefits of using dynamic symmetry. If anything, the heated discussion pushed me to better understand what made these almost identical patterns different. I'm glad I dug deeper because I learned how to better articulate the difference between proportional relationships and arithmetic relationships.